At the Air Force Academy

How shining shoes for hours on end and rugged academics turned an 18-year-old high school graduate into a capable and confident Air Force Second Lieutenant.

There is a lot of very difficult training at the Air Force Academy. It was a very tough experience, but it was a good 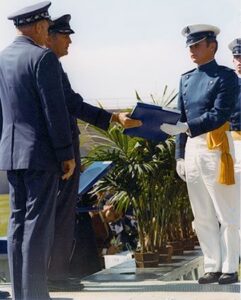 I didn’t understand the purpose of that training until about ten years later. They put you through hell. But the whole point of that hell is just this: when you are actually leading a flight of two, four, eight, sixteen airplanes, the situation is always changing. A refueling tanker drops out; an airplane aborts; the enemy’s location changes; one of your wingmen gets shot down.

The whole point of this training was to develop a cool, calm, and collected attitude, so you can make a split-second decision. And have it be the correct one.

I think they have a great training program to prepare cadets to become effective officers/leaders.  It worked for me.

All new cadets endure six weeks of basic cadet training during their first summer. The first week, it’s just trying to get acclimated to the altitude. Then, all of a sudden, all hell breaks loose. You’ve got three or four upperclassmen screaming at you. It was just a lot of hazing.

When you first arrive at the Academy, you are not prepared for what you are about to encounter. As an example, you will be shining your shoes for four hours a day, and then an upperclassman will come by with a saber during an inspection and put an “X” on it if it’s no good and put a check mark it if it’s good. Then you’ve got to start all over again. We spent a lot of time shining shoes.

Sometimes you would make a mistake at the dinner table, and you would sit at attention and not be allowed to eat.  The days were full of physical activities.

But the most important way to get through the first summer is to learn how to make your bed, shine your shoes, and how to arrange your closet.

Academics were very challenging. The Air Force Academy is usually among the top three engineering schools, along with Cal Tech and MIT. I laugh at some of these college kids today. They take four classes per semester. At the Academy, we were actually taking nine different courses per semester. You had to memorize a lot of material.

For all of that hell, I developed a strong feeling of camaraderie with my classmates. I still have contact with many of them today. If I ever needed any assistance, they’d be there in a heartbeat.

Three of my classmates from my class became four-star generals. We just went to my 45th reunion last year. My son, also an Academy graduate, came to the reunion with his kids. He got to talk to a four-star general who was a friend of mine. The General was very impressed that my son followed my footsteps and was flying the F-22. That’s probably the best fighter in the world.