Retired Air Force fighter pilot Jay Waitte honors the many Black soldiers who volunteered and fought for the Union…and for their freedom. 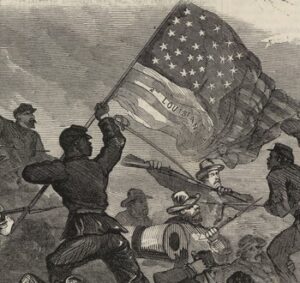 Black Americans have bravely fought for this country since this country began. Some 5,000 men were combat-dedicated troops during the Revolutionary War. And over 900 Tuskegee Army Air Force fighter pilots flew over Europe.

But this blog is dedicated to the Black soldiers from all over this country who fought to preserve the Union. In particular, this is the story about those who fought in Louisiana to break the back of the Confederate states.

In 1863, at the height of the American Civil War, the Siege of Port Hudson was part of the final campaign (along with the Siege of Vicksburg) to capture complete control of the Mississippi River for the Union. Union control would split the Confederacy in two.

Two Black regiments fought at Port Hudson, the First and Third Louisiana Native Guards. They were the first Black combat troops to fight in that war.

Back in July of 1862, Congress had passed bills authorizing the enlistment of Black soldiers. However, official enrollment occurred only after President Lincoln signed the Emancipation Proclamation in September 1862.

That month, the First and Third Regiments were two of the three units formed in New Orleans. They mostly consisted of slaves who had escaped to join the Union cause.

However, before deploying to Port Hudson, they largely performed “fatigue duty” – chopping wood, gathering supplies, digging earthworks, and guarding railway depots. The consensus among white troops was that Black soldiers would not advance in the face of deadly fire, but would instead retreat in panic.

The First and Third joined white troops in a ferocious assault against Confederate fortifications. The Union advance across Slaughter’s Field killed approximately 2,000 soldiers.

The First and Third faced murderous shell fire to attack Confederate batteries. They charged three times and reached to within 50 feet before being repulsed. Out of 1,000 men, the two units suffered 37 killed, 155 wounded, and 116 missing. They fought until ordered to retreat in the late afternoon.

As Union Major General Nathaniel P. Banks noted in his official report, the men’s “conduct was heroic” and that “no troops could be more determined or more daring.”

That May battle became a siege that lasted 48 days, until the Confederates surrendered on July 9th. After the siege, the garrison at Port Hudson became a recruiting center for Black troops.

There were many more battles to follow. Of the 180,000 Black troops who fought for the Union, 37,300 died. Over 20 were awarded the Congressional Medal of Honor, the nation’s most prestigious military decoration.

After the Civil War, many Black veterans struggled for recognition and had difficulty obtaining their pensions. The Federal government did not address the inequality until 1890. And many of the veterans did not receive service and disability pensions until the early 1900’s.