One of the best ways to learn how to train for air combat is to take off and look for other fighter jets to practice against. You would go fly a specified low level. And the next thing somebody would “jump” another country’s jet and try to get behind them and “shoot” them down. And then somebody would jump behind them. It was quite an experience.

Well, that is what happened to a friend of mine in Germany. He was flying and two Germans tried to get behind him like 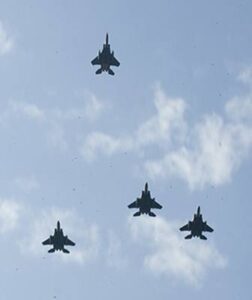 they would in any combat situation.

I guess he must have been looking backwards and didn’t realize how low he was. He flew right into a hillside. Both he and his back seater were killed.

He was a good friend. He even went to the Academy with me. That’s just part of life flying combat aircraft.

Another time, I had a chance to fly with the Thunderbirds, the Air Force’s elite aerobatics team. I always wanted to be a Thunderbird pilot, but they had switched to the T-38 trainer. I declined, because that was like going backwards instead of going forward. I chose to go in another direction.

So instead, one of my good friends became a Thunderbird pilot. One day they were practicing over Nevada. Flying in a tight formation, they performed a loop and flew right into the ground. I guess God was on my side as far as that one goes, but he was another good friend that we lost.

That goes on in my daily business life as well.

One time when I was with the Connecticut Air National Guard, I took off from Bradley International Airport with a flight of four A-10’s.  All of a sudden, the weather gets bad. Thunderstorms. So now, you’ve got four lives in danger. And they’re betting their lives on your ability to get them through this. That situation creates pucker power; you tighten up pretty hard. But you’ve got to breathe and relax.

So when you finally get back and land, you think about it– You did cheat death. I mean no matter what anybody says, you could have had a lightning strike or hit rough turbulence.

Then I would come back here, to our agency in Norwich, and get nasty memos from underwriters. Yeah, that’s moss on the building. Who cares?

My wife kind of understands, because she’s lived through all of this. But a lot of people have no idea when I talk about what I did – “I went up out over the Atlantic and had a dogfight with F-15’s out of Otis” – they have no idea what it takes to do that.

The problem, you know, is that most of the people really don’t understand.