Deploying Across the Atlantic 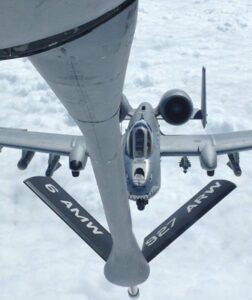 How flying an A-10 Warthog from Connecticut to West Germany has aspects you might be able to guess, and some you might not.

Many times when we deployed overseas, we would take off from Bradley International Airport. They would have us stay in a hotel and eat a special meal. You would eat steak and eggs the night before, to make sure you would go to the bathroom prior to takeoff. You wanted to make sure that you were “empty” because some of these flights are from 12 to 14 hours in a single-seat cockpit.

You would take off around 0400 and would rejoin with air refueling tankers over Nantucket.

There is a radio frequency reserved for the transiting pilots, so we could talk among ourselves. I came up with the idea of playing Trivial Pursuit. We would play all the way across the ocean.

There was only one point in the middle of the Atlantic, a stretch of a hundred miles, that if you had an inflight emergency you weren’t going make landfall–east or west! You would try to always air refuel to make sure you had enough gas to get wherever you had to go.

Tanker operations are very sophisticated. They have a special team that comes in. They take control of the deploying jets. They have a commander on the tanker.  We used to take twelve or fourteen jets over at a time with different sets of tankers. Usually, you put four A-10’s on one tanker.

I remember one time we were all wearing these “poopy suits”.  They are like wet suits to give the pilot extra protection if he has to eject. Think about it. You are in the jet for 12-14 hours. If nature calls….I was very lucky. I never had any issues with that. Some people did. For that, they had what they called a “piddle pack.”

One time we were deploying to Nordholz naval air base in northern Germany. By the time we got there it was getting late, and guys were tired, and the weather was inclement.  I elected to be the last one down, to make sure everybody landed safely.  When everybody is down–I land.

A German Admiral was there to great us. He reminds me of a World War II officer. He was wearing long leather like you see in the movies. I’m the last guy and I climb down from the cockpit. I’ve got on a pig hat and a pig shirt which has blinking eyes (the A-10’s nickname is the Warthog). I say “Let’s pig out.” He said “Ah, you Americans.” But he brought schnapps to all of the pilots. Another successful deployment!