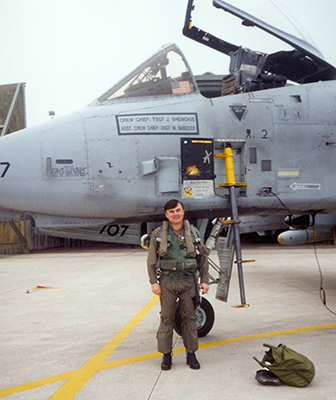 During the Cold War, the Warsaw Pact would test NATO’s air defense system.

The Warsaw Pact would start flying some of their jets directly at the border. Not parallel, but perpendicular, at a fairly high speed. They’d probably be going Mach 1. They were testing our response times.

Our radar sites would see if they were getting close to one of these different zones. NATO wants to make sure they are not allowed to get into West German airspace.

At Hahn airbase in West Germany, one of my duties was to sit “Air Defense Alert.” If the klaxon (alarm) sounded, you had five minutes to get airborne.

Our beds were upstairs, right above the jets (F-4 Phantom II’s). Even if the klaxon goes off while we were sleeping, we would be just like firemen and slide down the pole to get to the jets.

On one particular night, the klaxon went off. I was sleeping. I just automatically jumped on the pole. The crew chief was already by the jet. He had the ladder down. He assists me in getting my gear on.  I climb up into the cockpit.

Here’s how you could start these jets so quickly:

They had cartridges that look like enlarged shotgun shells attached to each of the engines. You would fire one off and it would spin the first turbine. The turbine would then start the engine. Then you would fire the second “shotgun shell”. In 30 seconds you are at full power with both engines up and running. You already had preset all your instruments to come back on as soon as electrical power came up.

The crew chief pulls the chocks.

You’re out the door.

All of a sudden, it’s getting cold. The cockpit has a heating system, but it felt funny. I looked down. I’ve only got my socks on! No combat boots!

It was not a big deal; you can still fly without boots. Sometimes things happen like that. You’re airborne in five minutes. From in bed to airborne.

I’ve been at different times in different places when the klazon goes off. I had been playing soccer, in the Officer’s Club, in the shower. I have had many different experiences during my flying career!