How The Dawn Patrol Influenced My Life 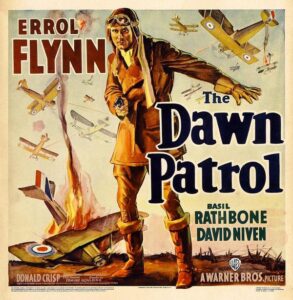 A lot of people have asked why I wanted to go to the Air Force Academy. It’s rather a funny story because one time I was watching Dawn Patrol starring Errol Flynn and David Niven.

What interested me is that they would be in a fighter squadron. At that time pilots were lucky if they lasted past 14 days. This was World War One. Fighter pilots were the superstars of their day. Both sides wrote up their pilot heroics in the newspapers. They were considered to be knights in the air, flying high above the mud in the trenches.

Their airplanes would only go 40 or 50 miles an hour. They were fragile; they would fall apart. And of course, they would get shot down.

But when they would get back, they debriefed and had a good meal. They would drink together in their squadron ready room.

So these two pilots, played by David Niven and Errol Flynn, are in the same squadron.  The movie focused upon the camaraderie between them and among their fellow pilots.

In real life, this camaraderie even extended with the Germans. If a German shot down an enemy aircraft, they would bring his boots back and drop them on his aerodrome. That is what they called airfields back then.

So, in the movie, Errol Flynn was supposed to go on a suicide mission. But David Niven took his place and gave up his life.

Watching the movie, I really enjoyed that camaraderie and the support of one another. Among pilots, you have friends for life. All of that is what made me want to become a fighter pilot.

And I figured our Air Force was probably the best in the world because my father was in the Army Air Corps in World War Two. And I figured the best way to get proper training was to go to the Air Force Academy, which I did.

All these fighter pilot stories you’ve heard or seen are pretty much true. And there’s definitely good-natured rivalry in addition to the pilot‘s camaraderie. But there is nothing like in the movie Top Gun, where the pilots are in the locker room and Maverick and Iceman are arguing.  Over sensationalized!

From the Movie Top Gun: The Locker Room Scene

Goose: We got Jester.

Iceman: Below the hard-deck doesn’t count.

Goose: We nailed that son of a bitch.

Iceman: You guys really are cowboys.

Iceman: You’re everyone’s problem. Every time you fly, you’re unsafe. I don’t like you. You’re dangerous.

That doesn’t happen. I mean, there’s rivalry in the air and stuff like that, but there’s nobody fighting everybody like that. Top Gun was just a little overboard, you know. The guys don’t do that. Guys are pretty low-key. They’ve got to be low-key if they’re getting shot at and cheat death, right?