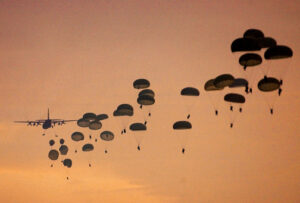 The summer following your sophomore year at the Air Force Academy is referred to as the Junior Summer. During part of that summer, I took Basic Airborne Training (BAT, aka “jump school”) at U.S. Army Airborne School, Fort Benning, Georgia.

Going to jump school was optional. I did it because it gave me the most time home that summer. Jump school didn't take the full three weeks. So, I got to add extra time to my summer leave. That meant I could have more time to see Kate, my fiancé.

And that was the only reason I went to jump school, because why would I want to jump out of a perfectly good airplane?

We cadets were on an exchange with the Army. The Air Force sent down maybe thirty of us.

Fort Benning. Georgia. In the summer. It was hot and humid, and our barracks didn’t have air conditioning. But the officer’s club did, and as cadets, we could use it, which we did. The club’s food was outstanding.

They split up the cadets and integrated us with the Army trainees to form groups of ten men that they called “sticks.”

The first week was called Ground Week. There was a lot of running and exercise. There’s a fitness test, which not everyone passed. But we cadets did a lot of physical exercises all the time, so we had no problems passing.

The first week also included learning about the parachute and practicing parachuting techniques. The first thing we did was to jump off an elevated table that was about eight feet high. We learned how to parachute landing fall, hitting the ground, and rolling, so you don't break your legs or anything.

Then we practiced jumping from a 35-foot tower. They would hook us up to a zip line that we’d slide down to get the feeling of approaching and landing. All this practice jumping helped us develop muscle memory. 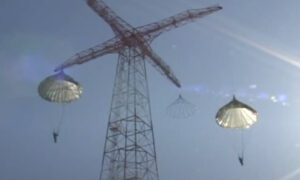 The second week was called Tower Week. They pulled us up a 250-foot tower with a fully opened parachute above each jumper. The picture to the left shows one of the towers with two trainees. When we got to the top, they released the parachute, and we floated down to the ground. We did that a few times.

Finally, Jump Week. We did five jumps out of a C-130 Hercules aircraft. One jump a day under different conditions.

No way did I pack my own chute! I'd be dead! They have special people that are trained to do that. They've got a big building where they stretch all the chutes out. There is a certain way to pack them. I got to watch them at work, in at least in one case, packing my own chute.

They always put the Air Force cadets right in the very front of the airplane, next to the door. You stood in the door for a while until the green light goes on. Meanwhile, you’re asking yourself: what the hell am I doing this for, jumping out of a perfectly good airplane?

But anyway, I did it. My parents came down to watch me jump. In the fifth and last jump, we were in full combat gear. That’s like 80 pounds, which means you land a little bit harder. Some guys broke their legs when they didn’t land right.

So that was it. We graduated and got our wings. Then I went home to see Kate.