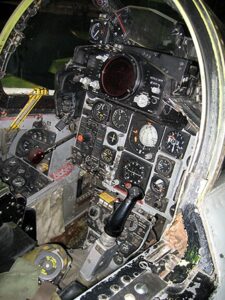 Sometimes problems with a jet come and go…and those are the most dangerous.

On a mission over Norway, we finished the dogfight training, then flew back to base at about a hundred feet over the fjords. It’s a very, very beautiful country.

Anyway, we headed back to the base. I flew in over the runway and made a 360-degree turn. I put the gear and flaps down. Then normally, you make your final turn and land. Well, as I’m trying to make that final turn, the stick jams! It’s not moving!

So, I told my back seater you’d better get ready to eject.

I put my feet up on the cockpit and pulled the stick back as hard as I could!

It worked and I got my flight controls back. I was able to land just in time.

I told my ops officer what had happened. But Maintenance couldn’t find anything wrong with the jet. They call it “Could Not Duplicate.” That happens a lot. The pilots come in and complain about something, and the maintainers can’t find the source of the problem.

So, the next day my ops officer – who was a major; I was a captain at the time – went out and flies a mission.  The flight controls froze on him as well, but he was able to land safely. “Could Not Duplicate” was again the answer from Maintenance.

So, they flew the jet back to RAF Lakenheath, England. But the maintenance people there still couldn’t find anything. Well, after they checked it out for a week or so, they gave the jet to a new lieutenant to fly.  After takeoff, right at the end of the runway, that jet just kept going straight up and he couldn’t do anything. The airspeed went to zero! So, he and his backseater both ejected and the airplane crashed at the end of the runway.

So, they finally did a complete investigation – that’s why aircraft accident investigations take so long – and they can tell everything that happened to that airplane.

They finally found a 50-foot thin metal rod that wasn’t supposed to be in the airplane. And every now and then this rod was jamming the flight controls. They never figured out how it got in there. Maybe someone accidentally left it in there during an inspection, like a surgeon leaving a scalpel.