World War II made “Rosie the Riveter” famous. But have you ever heard of the “Avenger Girls?” 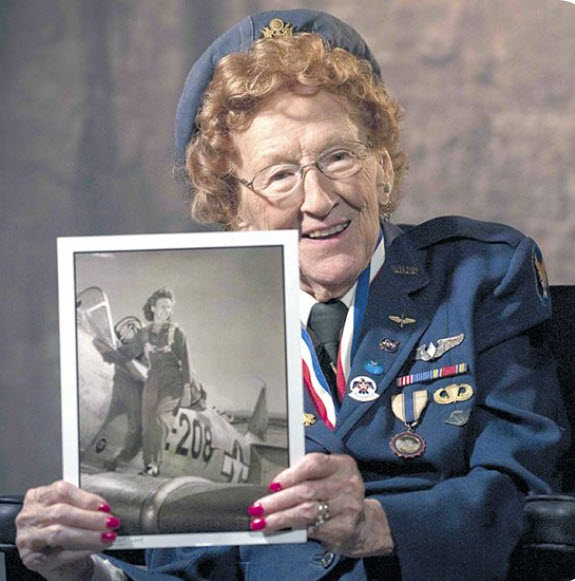 In 2012, Betty Wall Strohfus holds a picture of herself when she was a WASP pilot.

In 2012, Betty Wall Strohfus holds a picture of herself when she was a WASP pilot.

It was World War II. American factories were turning out aircraft by the thousands, but there weren’t enough male pilots to deliver them to airfields. Besides, male pilots were needed for combat duty overseas.

So, in August of 1943, the US Army Air Force (precursor to today’s US Air Force) combined two volunteer civilian pilot units. Female pilots.

The USAAF called them “Women Airforce Service Pilots,” or WASPs.

But they called themselves the “Avenger Girls” (you’ll find why in a minute).

The Avenger Girls were the first women to fly for the US military, paving the way for women to serve equally in the US Air Force.

Over 25,000 women applied. A total of 1,879 were accepted for training. Though treated like soldiers and led by officers, they were not officially part of the military. Instead, they were members of the federal civil service.

The new candidates paid their own way to basic training. They paid for their own dress uniforms. They were issued baggy male overhauls that they nicknamed “zoot suits.” Their pay was less than it was for male pilots.

They trained to fly at Avenger Army Field in Sweetwater, Texas (“Avenger Girls;” get it?)

Like male USAAF candidates, WASP candidate training was rigorous and stressful. A typical day at Avenger Field began at 6 am and ended at 10 pm.
While the WASP were not trained for combat flying, they still learned to fly “the Army way.” Their classroom time was just as demanding. They studied Morse code, meteorology, aircraft mechanics, military law, physics, and math. They specialized in cross-country navigation.

A total of 1,074 Avenger Girls earned their wings.

The Army trained each WASP to fly many types of planes, unlike men, who specialized in one. They transported over 12,600 military aircraft, flying almost every type of USAAF aircraft.

WASPs tested new and newly renovated aircraft, then ferried them long distances to military bases and forward deployment points across the country. They towed targets so gunners could practice shooting — with live ammunition. They simulated strafing missions and transported cargo.
Some tested difficult-to-fly aircraft, such as America’s first jet-propelled fighter, the B-29 Super Fortress. Some even flew rocket-propelled planes and worked with radar-controlled targets.

In all, the Avenger Girls logged over 60 million miles. They freed over 900 male pilots for combat duty.

Most male pilots and male officers were positive, but the women still experienced a hostile environment. Not everyone wanted women to succeed. Some male pilots resented them for taking stateside jobs.

Thirty-eight WASPs lost their lives in accidents while training and while on active-duty missions.

Because they were part of the federal civil service and not considered part of the military, a fallen WASP was sent home at the family’s expense. The WASPs worked together to contribute their own funds.

The USAAF prohibited traditional military honors, such as draping the US flag over their daughter’s caskets. But some families did so anyway.

The civil service WASPs are expected to become part of the military. But even with the support of the Chief of the Army Air Forces, all efforts failed in the face of resistance. Instead, the program was shut down in December 1944, after just 16 months.

Efforts to gain proper recognition began in the mid-1960s. In 1976, they persuaded Senator Barry Goldwater, who himself had ferried aircraft during the war, to help. Despite opposition, the WASP were finally granted veteran status in 1977.

Other honors followed, and in 2010 the WASPs received the Congressional Gold Medal, the highest honor Congress can award to a civilian or a group of civilians.

And it all started with the Avenger Girls.