Fighter pilots have a reputation for being cowboys. They even have their own rodeo.

The Israelis Air Force reviewed some of their gun camera film from the ’73 war. It was horrific. Their pilots had not been taught how to “dog fight.”  They were able to get behind the enemy aircraft, but they could not keep the “pipper” (gunsight) smoothly on the target in order to shoot that aircraft down. The pipper was all over the place.  A better training regimen was developed. 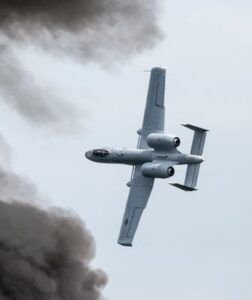 There was no war during the ’80s. The USAF decided to have a competition out at Nellis Air Force Base to hone pilot skills, called Gunsmoke. Different airplanes – all the types that we had – would have an NCAA-style playoff among Air Force units all over the world. It would finally get to 14 teams.

The different teams deploy to Nellis AFB, Las Vegas, NV, and participate in a two-week competition, including different types of air-to-ground events.

You would fly low-level navigation routes. They would give you a 250-mile route, and they would give you five checkpoints to fly through. Pairs of people would man these checkpoints, 100 feet apart.  In order to get a max score, you had plus or minus five seconds to fly through each checkpoint. Then you would drop a bomb on a designated target. They would score the bomb’s distance to the target and the time on target (TOT).  On one run, I hit all the checkpoints on time, hit the target (Bullseye!) exactly on the scheduled TOT!

Different types of bombing events were included in this competition. The referees would grade how close the bombs came to the target, utilizing a camera system. Finally, they would put up these big strafing panels. You got to strafe on three runs with a total of only 100 bullets. Afterward, they would go out and actually count the holes in these panels.

I was lucky. I actually won one event because they counted 98 holes out of 100 bullets shot.

Every two years they would have these competitions. I’m proud to say I’m the only pilot from the Air National Guard, Air Force Reserve, and the Air Force to have made it to that competition five times, all the way from 1981 to 1993. I thought it was quite an honor to have accomplished this.